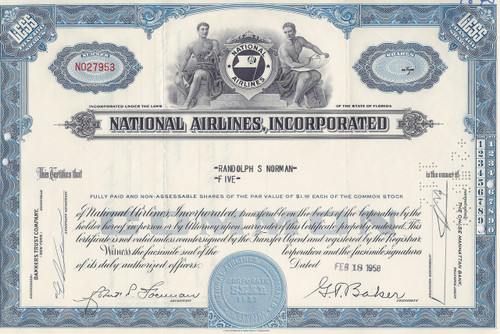 Very nice cert with a beautiful vignette of two Greek male figures flanking the company flag logo.  Great price on this aviation collectible, making it a great gift.  Issued and cancelled. Dates from the 1970's.

National Airlines was a United States airline that operated from 1934 to 1980. For most of its existence the company was headquartered at Miami International Airport, Florida. At its height, National Airlines had a network of "Coast-to-Coast-to-Coast" flights, linking Florida and the Gulf Coast with cities along the East Coast and large cities on the West Coast. From 1970 to 1978 National, Pan American World Airways (Pan Am) and Trans World Airlines (TWA) were the only U.S. airlines that operated scheduled passenger flights to Europe.

National Airlines was founded by George T. Baker in 1934, originally being headquartered in St. Petersburg, Florida and based at the city's Albert Whitted Airport. On 15 October of that year, revenue flights were launched, initially transporting passengers and mail from St. Petersburg to a few destinations within Florida using a fleet of two Ryan ST monoplanes. In 1939, the company headquarters were moved to Jacksonville. By the end of the decade, the National Airlines network spanned from Miami to New Orleans, on what it called the Buccaneer Route.

National was awarded rights from Florida to New York City and other cities along the East Coast in 1944, with flights starting in 1945. In 1946 National got approval to fly to Havana, Cuba, which coincided with the introduction of the Douglas DC-4

On 16 June 1970 National Airlines reintroduced international flights, when their Miami-London route opened (flights to Cuba were suspended in 1961 due to the Cuban Revolution). With the London route, they became the third U.S. transatlantic passenger carrier, after Pan Am and TWA.

In the late 1970s, several airlines tried to take over National Airlines, who had become a major player in the southern transcontinental and Florida-East Coast airline markets. In 1978, Texas International Airlines (which was led by Frank Lorenzo at that time) acquired 24.6 percent of the shares, but did not succeed in the subsequent tender offer takeover bid. A similar attempt was made by Eastern Air Lines in 1979. At the same time, the shares held by Texas International were sold to Pan American World Airways, who emerged as a white knight and succeeded in accumulating a controlling majority. On 7 January 1980, the acquisition was completed with Pan Am taking over the National Airlines fleet and route network.