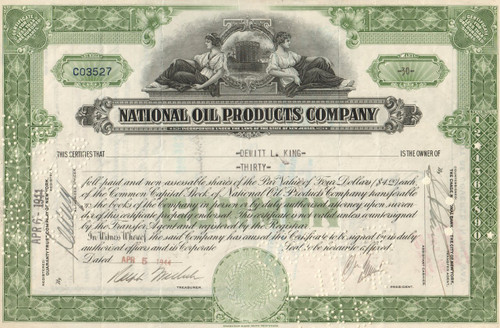 Although organized a s a business as early as 1907, the company was incorporated in 1912.  National Oil Products originally made greases, oils, vitamins(1928), and soaps (1907) in Harrison New Jersey using natural oils. By 1940, the company was producing over 2,000 chemicals.

National Oil Products Company changed its name to NOPCO Chemical Company in 1947. NOPCO Chemical merged into the Diamond Aikali Company who shortly thereafter merged with The Shamrock Oil Company to form the Diamond Shamrock Corporation in 1967. The company changed its name to Maxus Energy Corporation in 1987. The company was a broad based chemical firm producing hydrocarbons, heavy chemicals and intermediates, and specialty chemicals.