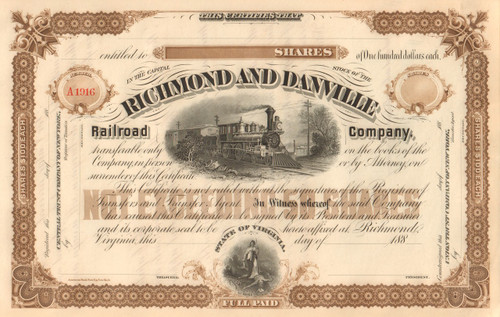 The Richmond and Danville Railroad (R&D) Company was a railroad that operated independently from 1847 until 1894, first in the U.S. state of Virginia and later on 3,300 miles of track in nine states.

The new Richmond and Danville Railroad was championed by Whitmell P. Tunstall, a lawyer in Chatham, Virginia who was also a member of the Virginia General Assembly. In 1847, the state of Virginia took a 60% interest in the capital stock of the company, which it would hold until 1871.

Construction on the 144 miles line began in 1849 under the supervision of Col. Andrew Talcott, who was later to become the Richmond and Danville's general manager. By 1850, the new railroad had reached Coalfield Station, near the coal mines in an area known today as Midlothian in western Chesterfield County. There, it competed with the mule-powered Chesterfield Railroad. Lawsuits followed, but the older railroad, the first in Virginia, was quickly supplanted by the competition.

By the end of 1851, the new line had reached Jetersville in Amelia County. Two years later, it was completed to a point near Drakes Branch, and had been graded to South Boston in Halifax County. Known as the "first railroad war," the American Civil War left the South's railroads and economy devastated. In 1862, the Richmond and York River Railroad played a crucial role in George McClellan's Peninsula Campaign. After the war, it was to be acquired by the Richmond and Danville (R&D) Railroad.

During the Civil War, the Confederate Army was handicapped by a lack of supplies when there often were plenty of supplies in the depots, but the quartermaster corps of the southern army was unable to deliver the goods efficiently. In one case, however, the war finally forced the Confederate government to over-rule objections by North Carolina. That state had blocked construction of a rail connection from Greensboro to Danville, fearing that after the war trade from North Carolina's Piedmont would continue to flow to Richmond via the R&D.

Following successful Union attacks on April 1, 1865, Confederate Gen. Robert E. Lee decided to abandon Petersburg and head west and south in an attempt to join Gen. Joseph Johnston's army in North Carolina. After evacuating Richmond the next day, on April 2, 1865, Confederate President Jefferson Davis and his cabinet left Richmond on the R&D. The departing Confederates set fire to the bridge across the James River between Richmond and Manchester. They traveled to Danville, where they attempted to set up a temporary government.

On reaching Amelia Courthouse during the morning of April 4, 1865, Lee's first thought was for the commissary stores. He found ordnance supplies in abundance, but no food. Lee waited 24 hours in vain there for R&D trains to arrive with badly needed supplies. Union cavalry, meanwhile, sped forward and cut the Richmond & Danville at Jetersville. Lee had to abandon the railroad, and his army stumbled across rolling country towards Lynchburg. On the morning of April 9, 1865, "Palm Sunday", Lee met Grant in the front parlor of Wilmer McLean's home near Appomattox Court House to surrender.

With the support of Virginia Governor Francis H. Pierpont, on September 13, 1865, Algernon S. Buford became president of the 140-mile Richmond and Danville Railroad. Damage from the war, including the bridge across the James River between Manchester and Richmond was repaired. Over the next 20 years, as R&D President, Buford and leaders including Richmonder James H. Dooley extended the track to three thousand miles. The R&D's early acquisitions included the Piedmont Railroad in 1866, and a 25-year lease of the North Carolina Railroad in 1871.

By 1890, the R&D System covered 3,300 miles of track in Virginia, North Carolina, South Carolina, Georgia, Tennessee, Alabama, Mississippi, Arkansas, and Texas. However, the R&D System had become financially unstable during all the growth. After the Richmond and West Point Terminal Railway and Warehouse Company, which then controlled the Richmond and Danville Railroad Company, declared bankruptcy, the Richmond and Danville Railroad Company was pulled down with it and receivers were appointed to take possession of its and its subsidiaries' property on June 15, 1892.

Reorganized by J.P. Morgan and his New York banking firm of Drexel, Morgan and Company, it was conveyed to the Southern Railway Company by deeds dated January 9, 1896, and August 30, 1897. The Southern Railway Company, incorporated in Virginia on the same date, June 18, 1894, controlled over 4,000 miles of line at its inception. Samuel Spencer became Southern's first president.