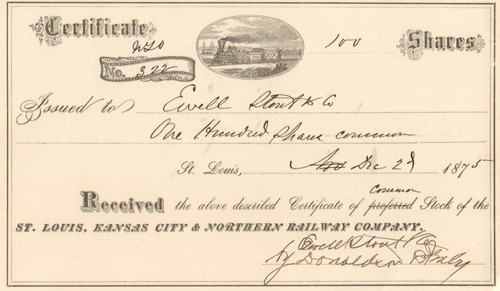 Simple vignette of a steam train travelling through the countryside. Issued and not cancelled. Smaller certificate measuring 4.5" by 7.5". Dated 1875.

Incorporated in 1872 in Missouri, this railroad company was short lived and merged with the Wabash, St. Louis and Pacific Railway in 1879.  This successor company ran until 1886 when it 's properties were split between the Omaha and St. Louis Railway, Wabash Western Railway.  Both of these companies became part of th e famous Wabash Railway.  Today, Norfolk Southern controls the old Wabash routes when purchased from the Pennsylvania Railroad.