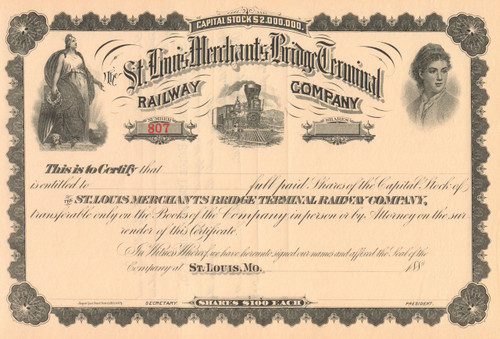 Nice railway stock cert printed with vignette of an oncoming steam train in the center, Lady Liberty to the left, and a classic female bust to the right.  Unissued and not cancelled. Circa1886 from company records.  Dated 188_.

The railroad operated by the St. Louis Merchants Bridge Terminal Railway Company, herein called the Merchants Terminal, is a standard-gage, steam, switching, and terminal railroad, located in Missouri and Illinois. It consists of 15 miles of first main track with 15.5 miles of additional main tracks, together with numerous yard tracks and sidings and a double-track bridge over the Mississippi River.

That part of the operated railroad which is owned by the Merchants Terminal consists of 3.8 miles of first main, 5.7 miles of second main, 1 mile of third main, and 1.3 miles of fourth main tracks, all located within the city of St. Louis, Mo., and extending from Eighth and Gratiot Streets to Carrie Avenue. The remaining mileage is owned by lessor companies whose entire common-carrier properties are leased to and operated by the Merchants Terminal, as described in the following paragraphs.

The railroad of The St. Louis Merchants Bridge Company, herein called the Merchants Bridge, consists of a double-track railroad extending from Bremen Avenue, St. Louis, Mo., to State Street, Venice, Ill., together with an important bridge across the Mississippi River, aggregating 2.5 miles of first main track and 2.5 miles of second main track. In addition, the Merchants Terminal has joint use of tracks and facilities of other carriers, the details of which are given in the chapter on leased railway property in Appendix 2.

In 1886 the St. Louis Merchants Exchange launched planned to build the Merchants Bridge to break the existing Gould (Edes Bridge) monopoly. The Merchants Bridge opened in 1890 but survived only three years before a lack of services and accessibility ran the bridge into bankruptcy.

Within four years of Wiggins Ferry Company's lower freight rates Gould struck the ferry service a hard blow when he finished the St. Louis terminal facilities and formed the Terminal Railroad Association in 1889. Railroads participating in the Association included the Wabash Railroad, the Cleveland, Chicago, Cincinnati, Missouri Pacific, the St. Louis, the Louisville and Nashville Railroad, the Ohio and Mississippi Railroad, and the St. Louis, Iron Mountain and Southern Railroad. The TRRA proved the winner in the bridge competition when it purchased the Merchants Bridge and its debt in 1893.