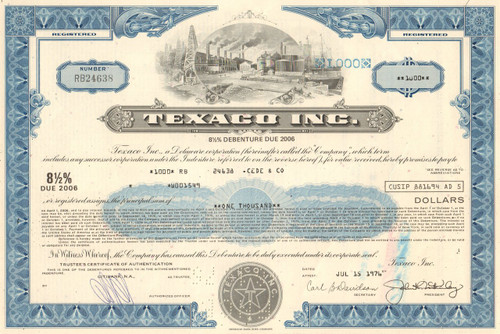 Great bond cert with a awesome vignette of oil wells and a refinery. Issued and cancelled. Dated 1970's.

Texaco ("The Texas Company") is the name of an American oil retail brand. Its flagship product is its fuel "Texaco with Techron". It also owns the Havoline motor oil brand.

Texaco was an independent company until its refining operations merged into Chevron Corporation in 2001, at which time most of its station franchises were divested to the Shell Oil Company. It began as the Texas Fuel Company, founded in 1901 in Beaumont, Texas, upon the discovery of oil at Spindletop. For many years, Texaco was the only company selling gasoline under the same brand name in all 50 US states, as well as Canada, making it the most truly national brand among its competitors. Its current logo features a white star in a red circle, leading to the long-running advertising jingles "You can trust your car to the man who wears the star" The company was headquartered in Harrison, New York, near White Plains, prior to the merger with Chevron.

Texaco was founded in Beaumont, Texas as the Texas Fuel Company in 1901. In 1905, it established an operation in Antwerp, Belgium, under the name Continental Petroleum Company, which it acquired control of in 1913. The next year, Texaco moved to new offices in Houston on the corner of San Jacinto and Rusk. In 1928, Texaco became the first U.S. oil company to sell its gasoline nationwide under one single brand name in all 48 states (50 states after Alaska and Hawaii joined the Union in 1959).

In 1931, Texaco purchased Indian Oil Company, based in Illinois. This expanded Texaco's refining and marketing base in the Midwest and also gave Texaco the rights to Indian's Havoline motor oil, which became a Texaco product. The next year, Texaco introduced Fire Chief gasoline nationwide, a motor fuel that meets the octane requirements for fire engines. It was promoted through a radio program over NBC hosted by Ed Wynn, called the Texaco Fire Chief. During this time, Texaco also supplied the Nationalist rebels in Spain (fascists), despite a federal fine, with a total 3,500,000 barrels of oil.

In 1936, the Texas Corporation purchased the Barco oil concession in Colombia, and formed a joint venture with Socony-Vacuum, now Mobil, to develop it. Over the next three years the company engaged in a highly challenging project to drill wells and build a pipeline to the coast across mountains and then through uncharted swamps and jungles.

In 1936, marketing operations east of Suez (including Asia, East Africa, and Australasia) were placed into a joint venture with Standard Oil Company of California – Socal (Chevron) under the brand name Caltex, in exchange for Socal placing its Bahrain refinery and Arabian oilfields into the venture. The next year, Texaco commissioned industrial designer Walter Dorwin Teague to develop a modern service station design. In 1938, Texaco introduced Sky Chief gasoline, a premium grade fuel developed from the ground up as a high-octane gasoline rather than just an ethylized regular product. In 1939, Texaco became one of the first oil companies to introduce a "Registered Rest Room" program to ensure that restroom facilities at all Texaco stations nationwide maintained a standard level of cleanliness to the motoring public.

In 1940, the CEO, Torkild Rieber, was forced to resign when his connections with German Nazism, and his supply of oil to the fascist forces during the Spanish Civil War were made public by the Herald Tribune through information produced by British Security Coordination. In 1947, Caltex expanded to include Texaco's European marketing operations. That same year, Texaco merged its British operation with Trinidad Leaseholds under the name Regent; it gained full control of Regent in 1956, but the Regent brand remained in use until 1968-9. In 1954, the company added the detergent additive Petrox to its "Sky Chief" gasoline, which was also souped up with higher octane to meet the antiknock needs of new cars with high-compression engines. The next year, Texaco became the sole sponsor of The Huntley-Brinkley Report on NBC-TV. In 1959, the Texas Company changed its corporate name to Texaco, Inc. to better reflect the value of the Texaco brand name, which represented the biggest selling gasoline brand in the U.S. and only marketer selling gasoline under one brand name in all 50 states. It also acquired McColl-Frontenac Oil Company Ltd. of Canada and changes its name to Texaco Canada Limited. Around this time, Paragon Oil, a major fuel oil distribution company in the northeastern U.S, was acquired.

In 1964, Texaco introduced the "Matawan" service station design at a station in Matawan, New Jersey. Two years later, Texaco replaced the long-running banjo sign with a new hexagon logo that had previously been test-marketed with the "Matawan" station design introduced two years earlier. The new logo featured a red outline with TEXACO in black bold lettering and a small banjo logo with a red star and green T at bottom. The following year, the Regent name was replaced by Texaco at British petrol stations. In 1970, in response to increasingly stringent federal emission standards that would ultimately lead to the mandating of unleaded gasoline in 1975 and later-model cars and trucks, Texaco introduced lead-free Texaco as the first regular-octane lead-free gasoline at stations in the Los Angeles area and throughout Southern California.

On November 21, 1980, the Lake Peigneur/Jefferson Island disaster occurred. Two years later, a new service station design was introduced. Several product names were also changed with the advent of self-service including Lead-free Texaco to Texaco Unleaded, Fire Chief to Texaco Regular, and Super Lead-free Sky Chief to Texaco Super Unleaded. On November 19, 1985, Pennzoil won a US$10.53 billion verdict against Texaco in the largest civil verdict in US history. This was due to the fact that Texaco established a signed contract to buy Getty Oil after Pennzoil entered into an unsigned, yet still binding, buyout contract with Gordon Getty. In 1987, Texaco filed for bankruptcy. It was the largest in U.S. history until 2001.

The following year, Texaco and Saudi Aramco agreed to form a joint venture known as Star Enterprise in which Saudi Aramco would own a 50% share of Texaco's refining and marketing operations in the eastern U.S. and Gulf Coast. In 1989, Texaco introduced System3 gasolines in all three grades of fuel, featuring the latest detergent additive technology to improve performance by reducing deposits that clog fuel injection systems. Toronto-based Texaco Canada Incorporated was sold to Imperial Oil with all Texaco Canada retail operations converted to Esso brand. Two years later, the company was awarded the National Medal of Arts. In 1991, non retail Canadian operations became Texaco Canada Petroleum Incorporated with head office in Calgary, Alberta.

In 1994, Texaco's System3 gasolines were replaced by new CleanSystem3 gasoline for improved engine performance. The following year, Texaco merged its Danish and Norwegian downstream operations with those of Norsk Hydro under the new brand HydroTexaco. This joint venture was sold in 2007 to Norwegian retail interests as YX Energi, following the purchase of Hydro by Statoil.

On February 8, 2002 Chevron Corporation merged with Texaco and Shell purchased Texaco's interest in the Equilon and Motiva joint ventures. Shell began converting its Texaco stations to the Shell brand the next year. In July 2004, Chevron regained non-exclusive rights to the Texaco brand name in the U.S. The following year, in August, Texaco introduced the Techron additive into its fuels in the U.S. and parts of Latin America. In 2007, Delek Benelux took over marketing activities for Chevron in Benelux, including 869 filling stations, mostly under the Texaco brand. Chevron Corporation also sold its Conoco stations in Mississippi to the Texaco brand name. Texaco Canada Petroleum Incorporated is dissolved in 2008 with Texaco exit from Canada. In 2010, Chevron and Texaco ended retail operations in the Mid-Atlantic US, removing their brand from 1,100 stations in Delaware, Indiana, Kentucky, North Carolina, New Jersey, Maryland, Ohio, Pennsylvania, South Carolina, Virginia, West Virginia, Washington, D.C., and parts of Tennessee.