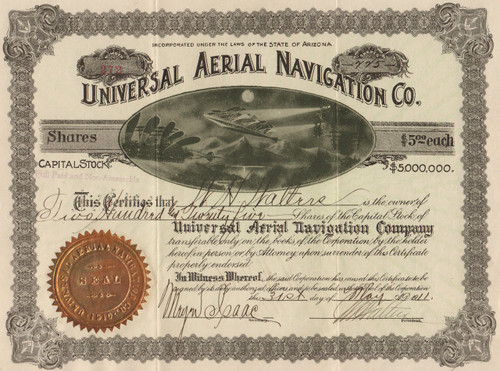 Amazing certificate from the Universal Aerial Navigation Co. Issued/not cancelled and dated 31 May 1911.  It measures 11 x 8.5 inches and would look great framed.  This is exceeding rare and highly sought after.   This historic document has an ornate border around it with a interesting vignette that resembles something out of Jules Verne with two futuristic aircraft that are captured in the searchlights of a third while they all float effortlessly in the moonlit sky and mountains in the background. Offered below market.

Share certificate with highly intriguing vignette of the "Gyroplane", an all metal flying machine invented by J. W. Owen. Convinced that a viable aircraft had to rise without a running start, he combined the helicopter principle to the ordinary monoplane to create his new design. The machine itself was constructed of steel and aluminum, thus avoiding the danger of burning up. A prototype was on exhibition at the St. Louis University Campus in 1912.

Company founded 1910 in Arizona to build a commercial passenger airship that would carry up to 100 passengers at a speed of up to 100 miles per hour. It could start from land or water, and could ascend straight into the air or be launched like an aeroplane, thus described as a gyroplane.

It would be built of aluminum and macadamite, and have two engines, driving four propellers of 12-feet diameter. It could be built in any size, from a two-man runabout to a monster carrying 50 or 100 passengers. Not unsurprisingly, there came nothing of the project. So the big question is whether this was a bona fide company or a scheme to defraud investors.