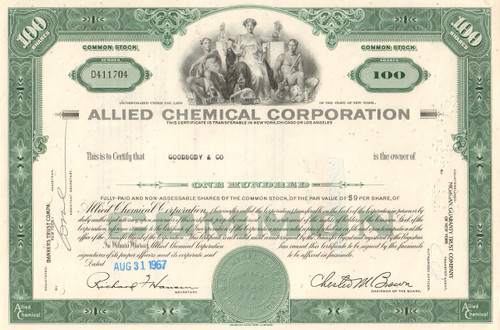 During World War I, Imperial Germany controlled much of the world's chemical production. This resulted in critical shortages of certain dyes, drugs and especially ammonia, a vital compound used to make fertilizers and explosives.

In 1920, publisher Eugene Meyer and noted chemist William Ripley Nichols founded Allied Chemical and Dye Corporation in order to address this shortcoming in American industrial production. Allied was an amalgamation of five existing companies, including the Standard Aniline Products Corporation and National Aniline and Chemical Works. Allied's first venture into new markets was the construction of a synthetic ammonia plant near Hopewell, Virginia in 1928. This would soon become the world's largest producer of ammonia.

After World War II, Allied began manufacturing other products, including Nylon 6 and refrigerants. The company name was simplified to reflect this diversification, becoming Allied Chemical Corporation in 1958. It also moved its headquarters to Morristown, New Jersey.

In 1962, Allied bought Union Texas Natural Gas. Allied initially regarded Union as a vertical integration supplier of raw materials for its chemical products. However, CEO John T. Connor, secretary of commerce under president Lyndon Johnson, sold many of Allied's unprofitable businesses in the 1970s and invested more heavily in oil and gas exploration. By 1979, Union Texas was generating 80% of Allied's revenue. As the company sought to further diversify its operations, it was renamed Allied Corporation in 1981.

Its next acquisition was Bendix Corporation, an aerospace and automotive firm. By 1984, Bendix was generating 50% of Allied's income, while oil and gas generated 38%. Between 1964 and 1984, the reporting marks used to identify Allied Chemical's rolling stock on the North American railroad network was NLX.