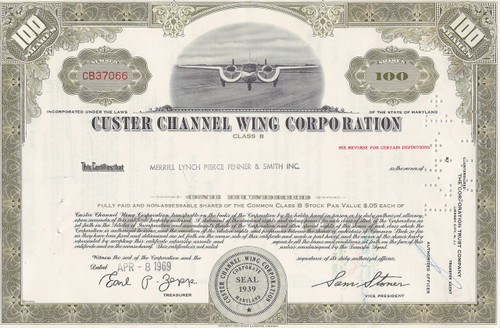 Fantastic aviation vignette of the company's unique aircraft design. While the planes flew, the design never caught on and the aerodynamics were not as efficient as believed. Issued and cancelled in the 1960's.

The Custer Channel Wing was a series of American-built experimental aircraft designs of the 1940s and 1950s incorporating a half-barrel shaped section to each wing.

Willard Custer filed a United States patent in 1929 for a wing design incorporating a semi-circular channel or "half barrel" shape in which an engine was to be fitted in pusher mode. Custer claimed that this layout, the channel wing, which gave STOL operating capabilities, resulted in a design "which is an aircraft not an airplane. It does not plane the air to fly, rather it brings the air to the lift surfaces and reduces pressure to fly at 8 to 11 mph"

The first aircraft to incorporate Custer's concept was the CCW-1 which was fitted with a single-seat and was powered by two 75 h.p. Lycoming O-145 pusher engines. Registered NX30090 in the FAAs experimental category, the sole example first flew on 12 November 1942 during a solo flight that was quite unintentional. Custer, who was a non-pilot, taxied the aircraft in a demonstration for financial backers and it suddenly became airborne. A hard landing followed, and one landing gear collapsed, but this did not dampen his backers' enthusiasm. This aircraft was donated to the National Air and Space Museum and displayed at Silver Hill, Maryland.

The CCW-1 was test flown by Frank D. Kelley, who would become a partner in the National Aircraft Corporation with Custer. The Channel wing concept was demonstrated with scale wind tunnel tests for the Army Air forces in Dayton in June 1944, and again in 1946 with 53 different configurations.

This was an evolution of the CCW-1 as a single-seat test bed and used an adapted uncovered fuselage of a Taylorcraft BC-12 light aircraft, replacing the single engine with two pusher engines fitted each side of the fuselage and placed within the wing channels.[4] The sole example N1375V first flew on 3 July 1948. It was flown for about 100 hours of testing with take-off and landing being made within 45–65 ft. Despite the claim of "flying better than a conventional aircraft" it was calculated that a stock Piper Cub was more efficient, lifting 18 lbs/h.p. versus the CCW-2s 11 lbs/h.p.[1] The CCW-3 and CCW-4 designations were not used.

During the early 1950s, Custer formed the Custer Channel Wing Corporation to develop and build the five-seat CCW-5 design which was intended for commercial sale. The first example N6257C was designed by Custer but built by the Baumann Corporation of Santa Barbara, California. It utilised an adapted fuselage and tail assembly of a Baumann Brigadier. Power was from two pusher 225 h.p. Continental O-470 engines. The first flight was made on 13 July 1953.

Custer persisted with his design and built the second example N5855V at the Custer Channel Wing Corp factory. It again used a Baumann Brigadier fuselage and tail assembly. Although several firms expressed interest in production of the design, all failed to provide sufficient funds. This aircraft first flew on 19 June 1964.

The CCW-5 accommodated five persons, and its power plants are suspended in the centre of the 6 ft-chord wing channels on tubular frameworks attached to the wing spars. The aircraft draws air through