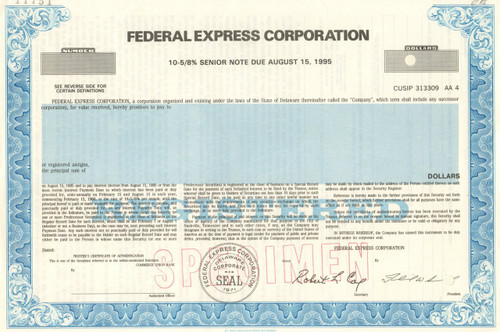 Uncommon specimen piece.   Plain certificate for a registered senior note at 10-5/8 % interest. Unissued and cancelled. Dated 1985 in the text.

Federal Express was an import/export company, incorporated 1971. Federal Express officially began operations on April 17, 1973, with 389 team members. That night, 14 small aircraft took off from Memphis and delivered 186 packages to 25 U.S. cities from Rochester, New York, to Miami, Florida. Though the company did not show a profit until July 1975, it soon became the premier carrier of high-priority goods in the marketplace and set the standard for the express shipping industry it established.

FDX Corporation was founded in January 1998 with the acquisition of Caliber System Inc. by Federal Express. With the purchase of Caliber, FedEx (1997) started offering other services besides express shipping. Caliber subsidiaries included RPS, a small-package ground service; Roberts Express, an expedited shipping provider; Viking Freight, a regional, less than truckload freight carrier serving the Western United States; Caribbean Transportation Services, a provider of airfreight forwarding between the United States and the Caribbean; and Caliber Logistics and Caliber Technology, providers of logistics and technology solutions. FDX Corporation was founded to oversee all of the operations of those companies and its original air division, Federal Express.

In the 1990s, FedEx Ground planned, but later abandoned, a joint service with British Airways to have BA fly a Concorde supersonic jet airliner to Shannon, Ireland with FedEx packages on board, and then FedEx would have flown the packages subsonically to their delivery points in Europe. Ron Ponder, a vice president at the time, was in charge of this proposed venture.

FedEx Corp. acquired privately held Kinko's, Inc. in February 2004 and rebranded it FedEx Kinko's. The acquisition was made to expand FedEx's retail access to the general public. After the acquisition, all FedEx Kinko's locations exclusively offered only FedEx shipping. In June 2008, FedEx announced that they would be dropping the Kinko's name from their ship centers; FedEx Kinko's would now be called FedEx Office.