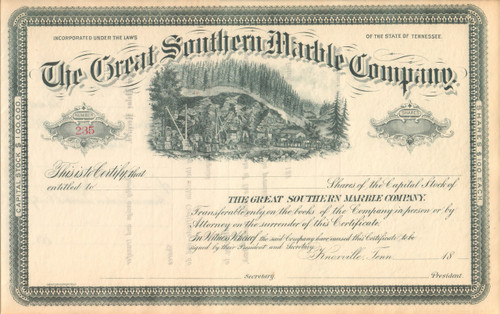 Incorporated 1884, the company was a reorganization of the John J Craig Company (est. 1878) and joined with Evans to form the Tennessee Producers Marble Company in 1889. In 1896, the company left the Tennessee Producers partnership, and once again operated as the John J. Craig Company. Craig's son, John J. Craig, Jr. (1860–1904), and grandson, John J. Craig III (1885–1944), would eventually serve as presidents of the company. John J. Craig III and several business partners established the Candoro Marble Works in South Knoxville in 1914. The company operated quarries near Friendsville and Concord, and was the foremost producer of pink Tennessee marble in the early 1900s. The company's now-abandoned Friendsville quarry and the Candoro Marble Works have been listed on the National Register of Historic Places.

As early as the late 18th century, Tennessee marble was being harvested for construction purposes, most notably for the Ramsey House on the outskirts of Knoxville and the "Old Stone House" near modern Friendsville. Visitors to East Tennessee were reporting the existence of marble beds in the region as early as the 1810s, and state geologist Gerard Troost provided an extensive description of Tennessee marble deposits in an 1831 report to the Tennessee General Assembly. The Rogersville Marble Company, founded in 1838, produced monuments and furniture from Tennessee marble extracted from a quarry in Hawkins County.