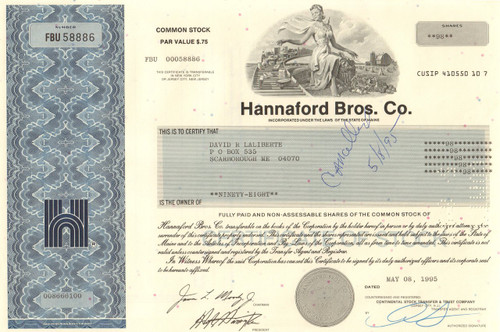 Great grocery piece. Nice vignette of a classical female figure next to a conveyor line of foods, farm scene in the background. Dated 1995.

Hannaford is an supermarket chain based in Scarborough, Maine. Founded in Portland, Maine, in 1883, Hannaford operates stores in New England and upstate New York. It was purchased by Delhaize America (a subsidiary of the Belgian Delhaize Group) in 2000.

Hannaford was founded in 1883 by Arthur Hannaford as a small produce store along the Portland, Maine waterfront. He was joined in 1902 by his brothers, Howard and Edward, and they incorporated Hannaford Bros. Co. By 1920 the company became a leading produce wholesaler in northern New England. Hannaford then relocated to a new five-story warehouse on Cross Street. In 1939, with the purchase of Tondreau Supermarkets Inc., sponsor of Red & White stores in Maine, Hannaford expanded into the wholesale grocery business. Late in 1944, Hannaford Co. opened its first retail outlet under an equity partnership arrangement with Adjutor Tondreau.

By 1960, Hannaford Bros. had constructed a 200,000-square-foot distribution center in South Portland, Maine to better service more retail stores. With the purchase of 31 Sampson's grocery stores in 1966 as well as the 1967 purchase of Progressive Distributors, Hannaford expanded its retail presence. By 1971, the company's earnings topped $1 million. Hannaford continued to rapidly expand throughout the 1970s and 1980s by opening a chain of Wellby Drug Stores, many of which were incorporated into Shop 'N' Save retail stores. By 1987 the company had spread into New York and Massachusetts; that same year sales hit $1 billion.

In the 1990s Hannaford began an expansion into the Southeast by purchasing a small Southeastern North Carolina supermarket chain, Wilson's Supermarkets, which served as the foundation of an expansion of Hannaford stores into the Carolinas and Virginia. In 2000, Delhaize America bought Hannaford; the purchase both eliminated an emerging competitor to its Food Lion chain in the Southeast and expanded Delhaize operations into the Northeast. Some Hannaford locations in North Carolina were sold to Lowes Foods upon the buyout by Delhaize while others were closed. However, the move ended up bringing an even bigger competitor into Food Lion's market when national chain Kroger bought 20 of the redundant stores.

The Hannaford name first took over from Shop 'N' Save on private labels in 1996. Five years later, stores in most of Maine, New Hampshire, Massachusetts, and Vermont assumed the name. As of 2006, only a small number of locations continue to use the Shop 'n' Save banner. Independently owned and operated franchises receiving merchandise through Hannaford's wholesale distribution continue to use the Shop 'n' Save name, mainly in smaller communities. In 2004, 19 Victory Supermarkets in Massachusetts and New Hampshire were purchased and converted to Hannaford stores.