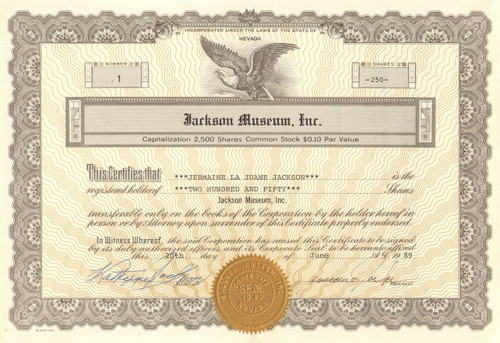 The proposed Las Vegas museum never got off the ground making this piece very collectible for Jackson fans.  The museum was intended to showcase the Jackson Five, the Jacksons, and each member of the Jackson family.

Jackson 5 exploded on the pop scene in 1969 with the relentlessly frenetic "I Want You Back". They were a dancing  (DANCIN') hit-machine. They had their own Saturday morning TV cartoon show. They also created a bizarre showbiz legend.

Collectively, they were brothers Sigmund, known as "Jackie"; Toriano, known as "Tito" ; Jermaine ; Marlon ; and Michael Jackson. They hailed from Gary, Ind. and were managed by their father, Joe. After cutting a few singles for the tiny Steeltown label, they attracted the attention of Motown Records. (Their videotaped audition is astonishing: 10-year-old Michael doing his best James Brown while the brothers lay down the groove in the background.) Motown threw everything it had behind the group, including the claim that Diana Ross had "discovered" them; that honor actually goes to a lesser Motown act Bobby Taylor & The Vancouvers , whose ranks included future comic Tommy Chong (of Cheech & Chong).

After "I Want You Back," they knocked out a couple of soundalikes and some hit ballads like "I'll Be There" and "Never Can Say Goodbye"; young Michael's vocal on Smokey Robinson's oft-covered "Who's Loving You" is a particularly wrenching ballad performance. Michael and Jermaine became successful solo artists in '71 and '72, respectively, and after one more solid smash--1974's percolating "Dancing Machine"--the Jackson 5 left Motown (and the Jackson 5 moniker) behind.

Steven, known as "Randy" (b. October 29, 1961), replaced Jermaine--who'd married Motown owner Berry Gordy's daughter Hazel Joy in 1973 and the group, now rechristened the Jacksons, went on to even greater success at Epic. Marlon, Randy and Jackie have since recorded their own solo albums; so have sisters Janet , Maureen (known as Rebbie ) and Latoya . The Jacksons were inducted into the Rock And Roll Hall Of Fame in 1997.

Michael Jackson  was a founder-member of the Jackson 5 at the age of four, soon becoming their lead vocalist and front man.  The Jackson Five were signed to Motown Records at the end of 1968; their early releases, including chart-toppers "I Want You Back", "ABC", "The Love You Save", and "I'll Be There", illustrated his remarkable maturity.  When MGM Records launched the Osmonds as rivals to the Jackson Five in 1970, and singled out their lead singer, 13-year-old Donny Osmond, for a solo career, Motown felt duty bound to reply in kind.

Michael Jackson's first release as a solo performer was the aching ballad "Got To Be There", a major US and UK hit. A revival of Bobby Day's rock 'n' roll novelty "Rockin' Robin" reached number 2 on the US chart in 1972, while the sentimental film theme "Ben" topped the chart later in the year. As the Jackson 5's sales slipped in the mid-70s, Michael's solo career was put on hold, and he continued to reserve his talents for the group after they were reborn as the Jacksons in 1976. He re-entered the public eye with a starring role in the film musical The Wiz, collaborating on the soundtrack album with Quincy Jones. Their partnership was renewed in 1979 when Jones produced Off The Wall, a startlingly successful collection of contemporary soul material that introduced the world to the adult Michael Jackson.

In 1982, Thriller, Jackson's second album with Quincy Jones, was released, and went on to become one of the most commercially successful albums of all time. The album and singles won Jackson a further seven Grammies; amidst this run of hits, Jackson slotted in "Say Say Say', another duet with Paul McCartney which topped the US singles chart for six weeks.

The media were clamored when he married Lisa Marie Presley in May 1994, perhaps in an attempt to rebuild his image. The marriage collapsed nineteen months later, giving further rise to allegations that it was merely a set-up to improve his soiled image.  It appears that, despite the allegations of child abuse and the constant media attacks, particularly surrounding his unexpected second marriage to Debbie Rowe (which ended in October 1999) and the birth of two children, Jackson's fans are destined to remain loyal to the "King of Pop".

On June 25, 2009, Michael Jackson died while lying in his bed at his rented mansion at 100 North Carolwood Drive in the Holmby Hills district of Los Angeles. Attempts at resuscitating him by Conrad Murray, his personal physician, were unsuccessful. Los Angeles Fire Department paramedics received a 911 call, arriving three minutes later at Jackson's location. He was reportedly not breathing and CPR was performed. Resuscitation efforts continued en route to the Ronald Reagan UCLA Medical Center, and for more than an hour after arriving there. He was pronounced dead at 2:26 local time. Jackson's death triggered a global outpouring of grief.