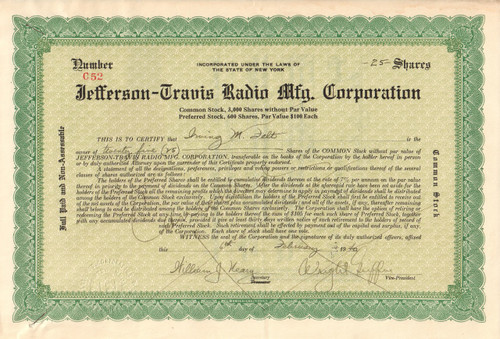 Jefferson Travis Radio Manufacturing Corp /Jefferson Travis Corporation was incorporated in 1937 with operations in Brooklyn NY. The business originally consisted of the design, engineering, and production of two-way radio communications and continuous sound recording-playback machines through the medium of acetate in cellophane tape. Some of the products included marine radio telephones and, during World War 2, defense radios used in the Pacific campaigns.

Jefferson Travis entered into a contract with Fonda Corporation (est. 1939) in February 1941 and merged in April 1945 to become Jefferson Travis Corporation. In November 1945, the company acquired stock of Musicraft Corporation. In December 1945, J-T acquired stock of Union Aircraft Products Corp. (which manufactured aircraft fittings and junction boxes). In January 1946, the company acquired Guild Records Inc. from American Glossite as a wholly-owned subsidiary devoted to manufacture and pressing of phonograph records for "another of the wholly-owned subsidiaries of the parent company" (possibly Musicraft Records) In June 1946, it acquired all stock of Musicraft Distributors, Inc.;

In October 1946, all assets of JTC Radio Communications Division sold to Emerson Radio Phonograph Corporation including use of JT name with the exception of the tape recorder hence the name Jefferson Travis Corporation was changed to Musicraft Recording Corporation which had thus disassociated itself from radio communication equipment business. The Jefferson-Travis brand was know for transistor radios in the early 1960s.