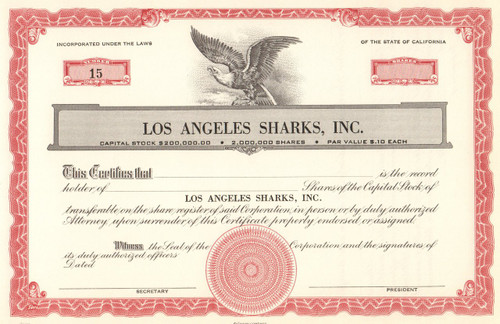 Great sports collectible. Nice vignette of an American Eagle with wings spread and perched on a rock.  Unissued and not cancelled. Circa 1970's from company records.

The Los Angeles Sharks were an ice hockey team that played in the World Hockey Association from 1972 to 1974. Their primary home arena was the Los Angeles Memorial Sports Arena but they sometimes played at the Long Beach Sports Arena when the Sports Arena had other contractual obligations. After the 1973–74 season, the franchise moved to Detroit to become the Michigan Stags and again mid-season to Baltimore to become the Baltimore Blades.

The franchise was originally referred to as the "Los Angeles Aces", but took the "Sharks" name after the proposed San Francisco Sharks franchise (not to be confused with the current NHL San Jose Sharks) was transferred to Quebec and became the Nordiques before the WHA began play. They kept the original colors from the name Aces; red and black being the colors of the suits in a deck of cards.