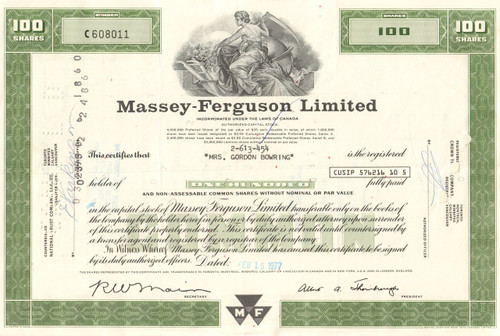 Great piece with a vignette of a classical female figure with a reaping scythe, a plow, and a bundle of wheat.  Issued and cancelled. Incorporated in Canada. Dated in the 1960's - 1980's.

Massey Ferguson Limited is a major agricultural equipment manufacturer that was based in Brantford, Ontario, Canada, before it was purchased by AGCO. The company was formed by a merger of Massey Harris and the Ferguson Company farm machinery manufacturer in 1953, creating the company Massey Harris Ferguson. However, in 1958, the name was shortened for the first time to coin the brand Massey Ferguson.

The firm was founded in 1847 in Newcastle, Ontario by Daniel Massey as the Newcastle Foundry and Machine Manufactory. The company began making some of the world's first mechanical threshers, first by assembling parts from the United States and eventually designing and building their own equipment. The firm was taken over and expanded by Daniel's eldest son Hart Massey who renamed it the Massey Manufacturing Co. and in 1879 moved the company to Toronto where it soon became one of the city's leading employers. Massey expanded the company and began to sell its products internationally. Through extensive advertising campaigns he made it one of the most well known brands in Canada. A labor shortage throughout the country also helped to make the firm's mechanized equipment very attractive.

In 1891, Massey Manufacturing merged with A. Harris, Son & Co. Ltd to become Massey-Harris Company Limited and became the largest agricultural equipment maker in the British Empire. The company made threshing machines and reapers as well as safety bicycles, introducing a shaft-driven model in 1898. In 1910, the company acquired the Johnston Harvester Company located in Batavia, New York, making it one of Canada's first multinational firms.

Massey-Harris revolutionized grain harvesting in 1938 with the world's first self-propelled combine.  . Unfortunately, it was too heavy and expensive for extensive mass production. However, it served as a guide for the building of the lighter and less costly version, which was tested in 1940 and put on sale in 1941. The Massey Harris series tractors remained in production until 1958 when the name of the company changed to Massey Ferguson.

In a complex turn of events, the Massey family turned to steam engine builder L.D. Sawyer & Company of Hamilton, Ontario, and started a line of steam tractors. These engines were quite successful and were built in a number of sizes. The 25 horsepower was popular, and the expanding Prairie provinces clamoured for big breaking engines. Massey also experimented with tandem compound engines. Sawyer Massey lasted only until 1910 when the firm was wound down, and Massey went into oil engines. Sawyer-Massey and Massey-Harris were two separate companies, both managed by the Massey family. Massey began experimenting with oil engines about 1910, with engines such as the Bulldog. However, success came only later in the 1920s with the Wallis line of tractors which was purchased by the firm.

In the 1930s, it introduced the first self-propelled combine harvester. Massey Harris also produced one of the world's first four-wheel drive tractors. The Massey family used its fortune to improve the city of Toronto and many institutions, such as the University of Guelph, University of Toronto, Upper Canada College, Crescent School, Appleby College, Massey Hall and Metropolitan United Church, were partially financed by the Masseys.

In 1953, the company merged with the Ferguson Company to become Massey-Harris-Ferguson, before finally taking on its current name in 1958. The company shortened the name to Massey Ferguson in 1958, and tried to consolidate the two dealer networks and product lines. Its television and radio advertising featured an upbeat jingle, with a male chorus singing, "He's a get-up-early, keep-'em-rollin', Massey-Ferguson kind of a man." But the company soon began to decline financially. Facing increasing international competition and an agricultural sector diminishing in importance, the firm began to struggle.

In 1955, Massey purchased the Australian H.V. McKay company, manufacturers of the brand Sunshine. Hugh Victor McKay had invented the stripper harvester in 1884, the first machine to combine the functions of reaping, threshing, and winnowing grain from a standing crop. McKay later established a manufacturing base at Ballarat, and then transferred to Braybrook Junction, where he took over the Braybrook Implement Company Works and renamed it the Sunshine Harvester Works after the harvester's brand name.

In 1930 the H.V. McKay Company was granted exclusive Australian distribution of Massey-Harris machinery. The company was then renamed H.V. McKay Massey Harris Pty Ltd. Throughout World War II H.V. McKay Massey Harris exported over 20,000 Sunshine drills, disc harrows and binders to England to facilitate the increase in food production.  In the 1950s the H.V. McKay company was progressively sold off to Massey Ferguson.  The factory was progressively sold off from 1970 until manufacturing was halted with the last section sold off and demolished in 1992.

In 1959, Massey bought 100% of Landini, based in Italy. Landini has built many models for Massey over the years, especially vineyard and crawler models. Massey sold 66% to ARGO SpA in 1989, some to Iseki later on, and the final portion was sold to ARGO in 2000.

In 1959 Perkins Engines of Peterborough, England, was purchased, Perkins having been the main diesel engine supplier for Massey Ferguson for many years. In 1990, Massey Ferguson took over Dorman Diesels of Stafford and merged it with Perkins to form Perkins Engines (Stafford) Ltd. In the 1980s, Perkins purchased Rolls Royce (Diesels) Ltd, to form Perkins Engines (Shrewsbury) Ltd. Perkins was sold off in 1998 by then owner LucasVarity to Caterpillar Inc., who were a major customer for their smaller and mid-sized engines; Caterpillar was a major producer of large diesel engines for static and mobile application.

In 1966, Massey purchased 32% of the Spanish tractor and auto company Ebro, or Motor Iberica. Ebro had previously built Ford tractors under license, but now began building models for Massey, and Massey models under license. Massey sold its interest to Nissan in the 1980s.

In the 1970s, Conrad Black, whose family had purchased control of Massey Ferguson's parent company, Argus Corporation, became active in Massey Ferguson's management. Under Black's leadership, Massey Ferguson instituted significant cost-cutting programs that returned the company to profitability. During the late 1970s, production was relocated to a new large facility in Brantford, Ontario. In 1973, Massey purchased the German company Eicher, and many Massey-licensed Eichers were built. They later sold their interest, and Dromson now owns the company. They now build specialized tractors for vineyards and such.

However, a world-wide decline in the agricultural equipment market combined with high inflation, high domestic interest rates and a major recession, caused Massey Ferguson to slip into a loss once again. In October 1980, Argus donated its shares in Massey Ferguson to the employee's pension plans, leading the way to a $250 million bail-out from the Government of Canada and the Province of Ontario for the collapsing company which later renamed itself Varity Corporation. In the mid-1980s, Varity spun off several money-losing divisions into an entity called Massey Combines Corporation in 1985. Massey Combines Corporation was headquartered in Brantford, Ontario and became insolvent on March 4, 1988, and its assets were re-acquired by Massey Ferguson.

In 1992, a management buyout of MF Industrial created the company Fermec, which finally ceased trading in 2001 when it was taken over by the Terex Corporation (Terex was formerly a unit of General Motors). This encompassed all construction equipment from Massey. It was then purchased by J. I. Case Company in 1997. Varity left Toronto and relocated to their head offices to the Williams-Butler House at 672 Delaware Avenue in the Millionaire Row area of Buffalo, New York.