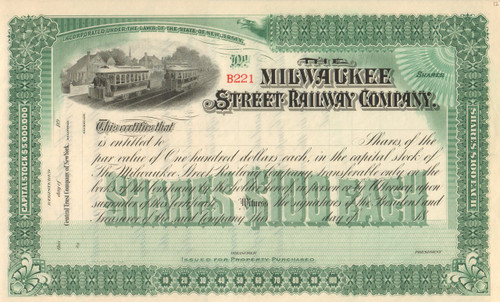 The first street railway in the city of Milwaukee was the River and Lakeshore Railway Company, which started operations with two horse-drawn trolley cars in 1860. The River and Lakeshore Company was absorbed by the Milwaukee City Railway Company in 1865. Rapid growth west of downtown led to the creation of yet another horse car line in 1874, the West Side Street Railway Co., with a line on Grand Avenue and Wells Street from the river to 22nd Street, and later to 34th Street to the west, and the C&NW depot to the east. 1890 brought electrification to Milwaukee, with the first electric car operated on the Wells Street line of the West Side Street Railroad Co. Consolidations continued into the 1890s, with the Milwaukee Street Railway emerging as a leader by 1893.

There were as many as 11 competing street railway companies in Southeastern Wisconsin between 1865 and 1890. The Milwaukee Street Railway Company, which was organized in 1890, began to take over and consolidate as many lines as possible, but the company ran into financial difficulties and was sold in a foreclosure sale in 1896. The buyer quickly incorporated a new company and called it the Milwaukee Electric Railway & Light Co.  The founder and chief financier was Henry Villard, who was a major backer of Thomas Edison's General Electric Company. He was determined to bring order to the lighting and electric railway businesses in Milwaukee.