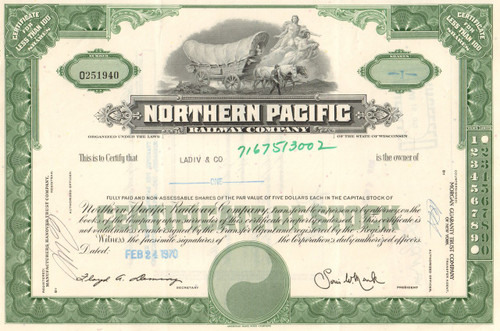 Nice piece with a wonderful vignette of a Conestoga wagon crossing the Prairie with multiple angels flying overhead..  Issued and cancelled. Dated 1970's.

The Northern Pacific Railroad) was a transcontinental railroad that operated across the northern tier of the western United States from Minnesota to the Pacific Coast. It was approved by Congress in 1864 and given nearly 40 million acres of land grants, which it used to raise money in Europe for construction.

On July 2, 1864, President Abraham Lincoln signed an Act of Congress creating the Northern Pacific Railroad Company. It would stretch from Lake Superior to the Puget Sound. Much of its route was to follow the route of the famed Lewis and Clark expedition across the West. Financing for the new railroad did not come about for several years, and it was not until 1870 that groundbreaking took place near Duluth, Minnesota.

Construction began in 1870 and the main line opened all the way from the Great Lakes to the Pacific when former president Ulysses S. Grant drove in the final "golden spike" in western Montana on Sept. 8, 1883. The railroad had about 6800 miles of track and served a large area, including extensive trackage in the states of Idaho, Minnesota, Montana, North Dakota, Oregon, Washington and Wisconsin. Jay Cooke at first managed the enterprise, but on September 18, 1873, the Northern Pacific and Jay Cooke were crushed by the Financial Panic of 1873. Things did not improve in 1874, with no credit available and no cash to continue construction. The Railroad was reorganized by Fredrick Billings in 1876 and by early 1877 it began to slowly move forward.

In addition the company had an international branch to Winnipeg, Manitoba, Canada. The main activities were shipping wheat and other farm products, cattle, timber and minerals; bringing in consumer goods, transporting passengers; and selling land. The company was headquartered first in Brainerd, Minnesota, then in Saint Paul, Minnesota. It had a tumultuous financial history, and in 1970 it merged with other lines to form the Burlington Northern Railroad.