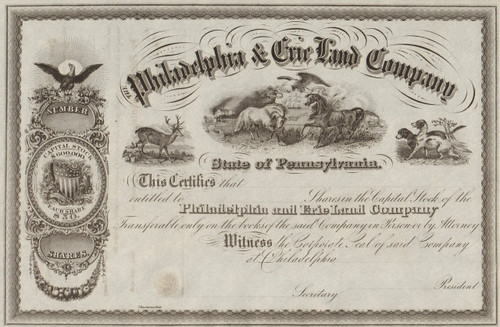 Uncommon land piece that is full of detail.  Wild horses in front on river and city scenes, hunting dogs, large deer, and an ornate border in the upper and lower left. Unissued but circa 1860.  Printed 186_ on the back.  Light, delicate paper measuring  7.5" by 11.5". Over 150 years old!

The company bought land for development along the Philadelphia and Erie Railroad.  Many towns, depots, and businesses came from this speculative company.

In October, 1862, William Baird sold his flats and twelve hundred acres of mountain land (near Hapman township) to Edward Miller, President of the Philadelphia and Erie Land Company. This company transferred to the Philadelphia & Erie Railroad Company sufficient land for the erection of car shops and other necessary railroad buildings. In 1863, the building of the extensive shops was commenced, and soon completed. About the same time the railroad company erected a large and elegant brick hotel, the Renovo House, and begun the passenger depot, a fine brick structure 112 feet long by 75 feet wide, which was completed in 1865.

The Cameron County Courthouse is an historic courthouse building located at 20 East 5th Street in Emporium, Cameron County, Pennsylvania. It was built in 1890 in the Richardsonian Romanesque style of architecture and its entire cost was paid by public subscription, $5,000 of which was given by the Philadelphia and Erie Land Company.  In order to secure the county seat for Emporium, it was necessary to raise sufficient money to erect the court-house. The generosity of the early settlers of Emporium for the benefit of the town was commendable, and the citizens of today are nobly following the example of the pioneers who have nearly all gone to receive the reward of their well-doing.