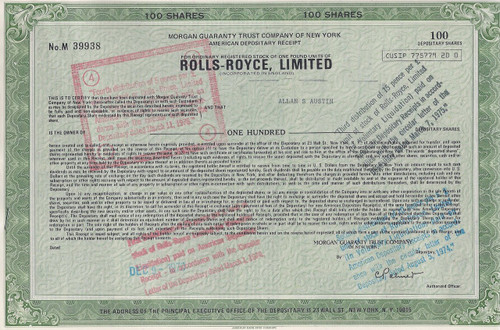 Very rare stock from the luxury auto maker.  This certificate represents an American Depository Receipt for 100 shares of stock in a US stock exchange.  Company remained incorporated in England.

Rolls-Royce Limited is a renowned English car-manufacturing company and later, aero-engine manufacturing company founded by Charles Stewart Rolls and Sir Frederick Henry Royce on 15 March 1906 as the result of a partnership formed in 1904.  In 1884 Henry Royce started an electrical and mechanical business. He made his first car, a two-cylinder Royce 10, in his Manchester factory in 1904, and was introduced to Charles Rolls at the Midland Hotel, Manchester on 4 May of that year. Rolls was proprietor of an early motor car dealership, C.S.Rolls & Co. in Fulham.

During 1906 Royce had been developing an improved six-cylinder model with more power than the Rolls-Royce 30 hp. Initially designated the 40/50 hp, this was the company's first all-new model. After the introduction of the Phantom model in 1925 this 40/50 model was referred to as the Silver Ghost. In 1921, the company opened a second factory in Springfield, Massachusetts in the United States, where a further 1,701 "Springfield Ghosts" were built. This factory operated for 10 years, closing in 1931. Its chassis was used as a basis for the first British armoured car used in both world wars.

In 1931 Rolls-Royce acquired the much smaller rival car maker Bentley after the latter's finances failed to weather the onset of the Great Depression. From soon after World War II until 2002 standard Bentley and Rolls-Royce cars were often identical apart from the radiator grille and minor details.

Rolls-Royce and Bentley car production moved to Crewe in 1946 where they began to assemble complete cars with bodies from the Pressed Steel Company for the first time. Previously they had built only the chassis, leaving the bodies to specialist coach-builders.