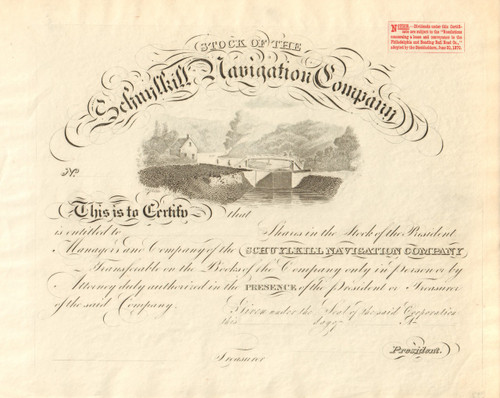 Great vignette of the Schuylkill canal with an early lock.  Printed on light paper. Unissued and not cancelled. Circa 1830 from issued examples.

The Schuylkill Navigation Company was incorporated in 1815 for the purpose of making the Schuylkill River navigable. The "canal" or navigation system was constructed between Port Carbon and Philadelphia and covered a distance of 108 miles. The canal was more properly a navigation system because it consisted of 18 dams, 23 canals which covered 57.73 miles, 120 locks, 17 stone aqueducts, one 450 foot long tunnel, 50.50 miles of slack water pools, 23 canals covering 57.73 miles, and 31 houses for toll and lock keepers when it was completed in May 1825. After 1825 efforts to improve the navigation system were ongoing, so the above number of structures changed over the years.

The Chester County Canal, also known as the Phoenixville Branch Canal, was an addition to the Navigation built by the Schuylkill Navigation Company in 1828 to provide water power to a new nail works in Phoenixville. The new canal connected the slack water pool of the Schuylkill Canal above the Black Rock Dam to Phoenixville. This canal paralleled the top end of the Oakes Reach, on the opposite side or the river. While the Chester County Canal was initially built to provide water power to the mill, in 1847 it carried scheduled passenger service between Phoenixville and Norristown. The spring freshet of 1869 destroyed the mill "and very much injured the canal and its locks

The system was most prosperous between 1835 and 1841 although its record tonnage, nearly two million tons, occurred in 1859. By 1845, the railroad was able to haul three times as much anthracite to Philadelphia each year as the Schuylkill Navigation. To counter this threat, the Schuylkill Navigation Company began a major expansion program. By 1847 the canals had been enlarged to allow the passage of boats carrying 230 tons of coal. In 1850, a price-fixing arrangement with the railroad stabilized prices for the transportation of anthracite. This decade was the Schuylkill Navigation's most prosperous period; in 1859, its peak year, it transported 1,700,000 tons of cargo. However, in that same year the Philadelphia and Reading Railroad carried over 2,500,000 tons.

During the second half of the 19th century the rise of the railroad, floods, droughts, and a miners' strike contributed to the downfall of the system. In January 1870 the navigation system, was leased to the Philadelphia and Reading Railroad Company for 999 years although the railroad company was obligated to maintain the system in good condition except for the section north of Port Clinton which was abandoned around 1887.

The Schuylkill River is a river in Pennsylvania that William Penn chose in 1682 as one bank of the confluence upon which he founded the planned city of Philadelphia on lands purchased from the native Delaware nation. It is a designated Pennsylvania Scenic River, and its whole length was once part of the Delaware people's southern territories. Its upper end rises in what are called the richest anthracite coal fields in the world.

The river is about 135 miles long. Its watershed of about 2,000 sq mi lies entirely within the state of Pennsylvania. The source of its eastern branch is in the Poconos offshoot of the Appalachian Mountains at Tuscarora Springs, near Tamaqua in Schuylkill County. The West Branch starts near Minersville and joins the eastern branch at the town of Schuylkill Haven, Pennsylvania. It then combines with the Little Schuylkill River downstream in the town of Port Clinton, Pennsylvania. The Tulpehocken Creek joins it at the western edge of Reading. Wissahickon Creek joins it in northwest Philadelphia. Other major tributaries include: Maiden Creek, Manatawny Creek, French Creek, and Perkiomen Creek. The Schuylkill joins the Delaware River, of which it is the largest tributary, at the site of the former Philadelphia Navy Yard, now the Philadelphia Naval Business Center, just northeast of Philadelphia International Airport.