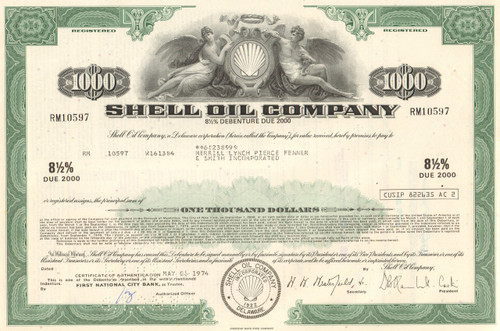 Shell Oil Company is the United States-based subsidiary of Royal Dutch Shell, a multinational "oil major" of Anglo-Dutch origins, which is amongst the largest oil companies in the world. Approximately 22,000 Shell employees are based in the U.S. The U.S. head office is in Houston, Texas. Shell Oil Company, including its consolidated companies and its share in equity companies, is one of America's largest oil and natural gas producers, natural gas marketers, gasoline marketers and petrochemical manufacturers.

Shell is the market leader through approximately 25,000 Shell-branded gas stations in the U.S. which also serve as Shell's most visible public presence. Shell Oil Company is a 50/50 partner with the Saudi Arabian government-owned oil company Saudi Aramco in Motiva Enterprises, a refining and marketing joint venture which owns and operates three oil refineries on the Gulf Coast of the United States.

In 1903, Royal Dutch and Shell begin a joint marketing campaign under name British Dutch. In 1907, this partnership is extended worldwide, with the creation of the Royal Dutch / Shell Group of Companies. In 1912, trading in the US starts after the acquisition of the American Gasoline Company, an American marketing company. The First World War years saw many of Shell’s operations closed down or confiscated; but others were added or expanded, particularly in North America.

In 1919, Alcock and Brown made the first non-stop flight across the Atlantic – powered by Shell fuel. Shell Aviation Services was established that same year. The 1920s and 1930s were expansion years, with Shell businesses in new regions and new industry sectors; Shell’s first foray into chemicals began in 1929. During the Second World War, Shell once again lost businesses, tankers and properties, but supported the Allied Governments with fuel supplies and chemical production.

The Shell Oil Company Warehouse, built in 1925 and located at 425 S. N. 16th Ave. Phoenix, Arizona. It is listed in the National Register of Historic Places.  Shell products include oils, fuels, and card services as well as exploration, production, and refining of petroleum products. The Shell Oil Refinery in Martinez, California, the first Shell refinery in the United States, supplies Shell and Texaco stations in the West and Midwest. Shell gasolines previously included the RU2000 and SU2000 lines (later there was a SU2000E) but they have been superseded by the V-Power line.

Until the mid-1980s Shell's business in the United States was substantially independent. Limited direct involvement from the main office in the Hague, Netherlands and having its stock "Shell Oil" traded on the New York Stock Exchange were factors. However, in 1984, Royal Dutch Shell made a bid to purchase those shares of Shell Oil Company it did not own. Shell completed the buyout for a sum of $5.7 billion. Despite the acquisition, however, Shell Oil remained a fairly independent business. This was due in part to complex legal reasons as Royal Dutch Shell feared that there could be onerous liability problems if a closer control of Shell Oil's affairs was exercised by the "parent companies." One consequence of this independence was that the Shell logo used in the U.S. was slightly different from that used in the rest of the world. In the 1980s Shell Oil's independence began to gradually erode as the "parent companies" took a more hands-on approach in running the business. The logo used in the United States is the same as that used elsewhere since June 1, 1998.

In 1997, Shell and Texaco entered into two refining/marketing joint ventures. One combined their Midwestern and Western operations and was known as Equilon. The other, known as Motiva, combined the Eastern and Gulf Coast operations of Shell Oil and Star Enterprise, itself a joint venture between Saudi Aramco and Texaco. After Texaco merged with Chevron in 2001, Shell purchased Texaco's shares in the joint ventures. In 2002, Shell began converting these Texaco stations to the Shell brand, a process that was to be completed by June 2004 and was called "the largest retail re-branding initiative in American business history.