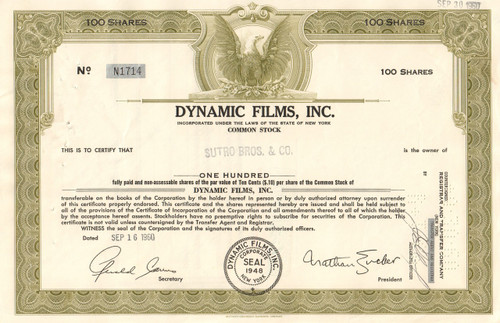 Uncommon movie piece from NY.  Nice vignette of a classic eagle with wings spread, printed in the same color as the certificate border.  Issued and cancelled. Dated 1960.

Dynamic Films was incorporated in New York in 1948 (company seal) . The company’s headquarters were located on W 89th Street in Manhattan with offices on Park Avenue.  The company produced educational, documentary, industrial, and theatrical films and TV production series and commercials.

Dynamic Films operated sound stages and production facilities for 35mm and 16mm productions. The company produced an Oscar-nominated documentary, Psychiatric Nursing, in 1958. The company's name was changed to DFI Communications, Inc. in 1969.