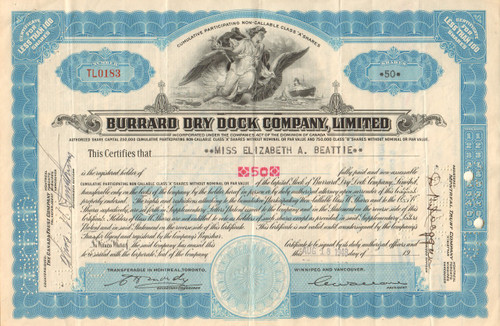 Burrard Dry Dock Ltd. was a Canadian shipbuilding company headquartered in North Vancouver, British Columbia (city). Together with the neighboring North Van Ship Repair yard and the Yarrows Ltd. yard in Esquimalt, which were eventually absorbed, Burrard built over 450 ships, including many warships built and refitted for the Royal Navy and Royal Canadian Navy in the First and Second World Wars.

1905 - Wallace Shipyards is incorporated. The following year the company establishes a new, larger shipyard at the foot of Lonsdale Avenue in North Vancouver.

1911 - July 11, the shipyard is destroyed by fire but is immediately rebuilt.

1914-18 - During the First World War, Wallace Shipyards is contracted to make shells for 18-pounder guns, then builds 6 large cargo schooners and 3 freighters - the first deep-sea steel-hulled ships built in Canada - for the merchant marine. To build the wooden schooners, Number 2 Yard is established west of the Squamish Indian Band reserve (now the site of the North Shore Auto Mall). In 1917, Wallace leases Number 2 yard to the William Lyall Shipbuilding Company, which ultimately built 27 wooden ships there before it closes in 1920.

1946 - Yarrows Ltd. of Esquimalt, BC is acquired from Yarrow Shipbuilders of the United Kingdom.

1967 - In a move to consolidate the shipbuilding industry on the Pacific Coast, Burrard Dry Dock acquires the assets of Victoria Machinery Depot in Victoria, British Columbia and immediately closes its shipyard.

1992 - Cancellation of the Polar 8 Project leads to bankruptcy of Versatile Pacific Shipyards. The North Vancouver shipyard is closed and the last employees are laid off. The floating drydocks along with support buildings at the eastern end of the shipyard are acquired by a new company, Vancouver Drydock, which is still in operation today.

1993 - The Esquimalt shipyard closes. The following year its assets are taken over by Victoria Shipyard, which is now part of Seaspan Marine Corporation.

1997 - City of North Vancouver study recommends mixed use development on the site. * 2000 - Real estate developer Pinnacle International creates a plan for the site involving multiple condo towers, hotel, commercial space and public amenities. Three of the former shipyard buildings, two shipyard cranes and the stern and steam engines from the former HMS Flamborough Head (HMCS Cape Breton), which was built here in 1944, are to be preserved as part of the development.

2006 - The City of North Vancouver announces a plan for a new National Maritime Museum of the Pacific with federal and provincial funding to be located on the property. The city also negotiates with Pinnacle International for increased density and building heights in return for approving development of the site and to make room for the museum.

2010 - The National Maritime Museum project is shelved after the provincial government failed to commit funding. The continued vision for site, to be housed inside the former Machine Shop building, is for a resident and tourist destination including a regional attraction and supporting retail uses. The Machine Shop building is temporarily dismantled and removed during site construction, while the former Pipe Shop and Coppersmiths Shop have been restored for retail use. The shipyard cranes have been restored and now tower over the development, one above Shipyard Plaza and one above Craneway Plaza. Signs and dioramas around the site tell the history