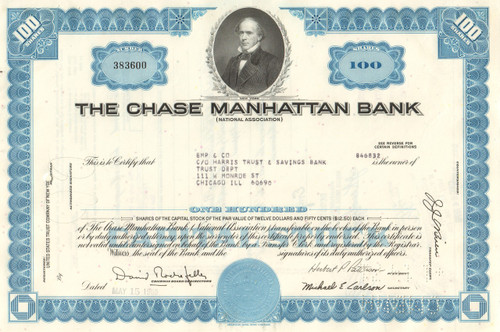 Great banking stock with a neat vignette of Salmon P. Chase.  David Rockefeller printed signature as company officer (president or CEO, depending on date).  Issued and cancelled. Dated in the late 1960's.

David Rockefeller served as an officer of the Chase Manhattan Bank from 1946 to 1981. He was Chairman and Chief Executive Officer from 1969 until 1980, and continued as Chairman until his retirement. As of September 2013, his net worth is estimated to be US $2.8 billion, ranking him among the 200 richest people in the world.

Chase traces its history back to the founding of The Manhattan Company by Aaron Burr on September 1, 1799, in a house at 40 Wall Street. Over two centuries after Burr and Hamilton's now-infamous duel that claimed Hamilton's life, it can be said that the Bank of the Manhattan Company ultimately won the "business" side of the rivalry. In 2006, the modern-day Chase bought the retail banking division of the Bank of New York, which then only months later merged with Pittsburgh-based Mellon Financial to form the present-day BNY Mellon.

Chase National Bank was formed in 1877 by John Thompson. It was named after former United States Treasury Secretary and Chief Justice Salmon P. Chase, although Chase did not have a connection with the bank.  The Chase National Bank acquired a number of smaller banks in the 1920s, through its Chase Securities Corporation. In 1926, for instance, it acquired Mechanics and Metals National Bank. However, its most significant acquisition was the Equitable Trust Company of New York in 1930, the largest stockholder of which was John D. Rockefeller, Jr. This made Chase the largest bank in America and indeed, in the world.

Chase was primarily a wholesale bank, dealing with other prominent financial institutions and major corporate clients, such as General Electric, which had, through its RCA subsidiary, leased prominent space and become a crucial first tenant of Rockefeller Center, rescuing that major project in 1930. The bank is also closely associated with and has financed the oil industry, having longstanding connections with its board of directors to the successor companies of Standard Oil, especially ExxonMobil, which are also Rockefeller holdings.