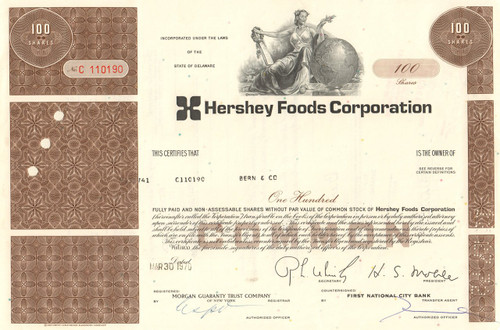 Fun candy collectible. Nice vignette of classical female figure seated with tablet and a globe of the earth.  Issued and cancelled. Dated 1970's.

The Hershey Company, known until April 2005 as the Hershey Foods Corporation and commonly called Hershey's, is the largest chocolate manufacturer in North America and increasingly elsewhere throughout the world. Its headquarters are in Hershey, Pennsylvania, which is also home to Hershey's Chocolate World. It was founded by Milton S. Hershey in 1894 as the Hershey Chocolate Company, a subsidiary of his Lancaster Caramel Company. Hershey's products are sold in over sixty countries worldwide. In addition, Hershey is a member of the World Cocoa Foundation.

After completing an apprenticeship to a confectioner in 1873, Hershey founded a candy shop in Philadelphia. After another failed business attempt in New York, Hershey returned to Pennsylvania, where in 1886 he founded the Lancaster Caramel Company. The use of fresh milk in caramels proved successful and, in 1900, after seeing chocolate-making machines for the first time at the 1893 World's Columbian Exposition in Chicago, Hershey sold his caramel company for $1,000,000 and began to concentrate on chocolate manufacturing.

In 1896 Milton built a milk-processing plant so he could create and refine a recipe for milk chocolate candies. In 1899 he developed the Hershey process which is less sensitive to milk quality than traditional methods, and in 1900 he began manufacturing Hershey's Milk Chocolate Bars, also called Hershey's Bars or Hershey Bars. In 1903 Hershey began construction of a chocolate plant in his hometown, Derry Church, Pennsylvania, which later came to be known as Hershey, Pennsylvania.

In 1907 Hershey introduced a new candy, bite-size flat-bottomed conical-shaped pieces of chocolate that he named "Hershey's Kiss". Initially they were individually wrapped by hand in squares of aluminum foil, and the introduction of machine wrapping in 1921 simplified the process while adding the small paper ribbon to the top of the package to indicate that it was a genuine Hershey product. Other products introduced included Mr. Goodbar (1925), containing peanuts in milk chocolate, Hershey's Syrup (1926), semi-sweet chocolate chips (1928), and the Krackel bar containing crisped rice (1938).

Shortly before World War II, Bruce Murrie, son of long-time Hershey's president William F.R. Murrie struck a deal with Forrest Mars to create a hard sugar-coated chocolate that would be called M&M's (for Mars and Murrie). Murrie had a 20% interest in the confection, which used Hershey chocolate during the rationing era during World War II. In 1948 Mars bought out Murrie's interest and became one of Hershey's main competitors.

Harry Burnett Reese worked at Hershey, beginning in 1917, as a dairyman for the Hershey Farms. In 1921 he went to work in the factory, and, by 1925, he had developed an assortment of candies which he sold to department stores in Lancaster, Pennsylvania, advertised as "made in Hershey." In 1926 he built his own factory, and, in 1941, with the wartime rationing of sugar, Reese focused all of his production resources on his own confectionery specialty, Reese's Peanut Butter Cups, which required less sugar than most other confections of the time. In 1963, Hershey Chocolate Corporation acquired Reese's company.