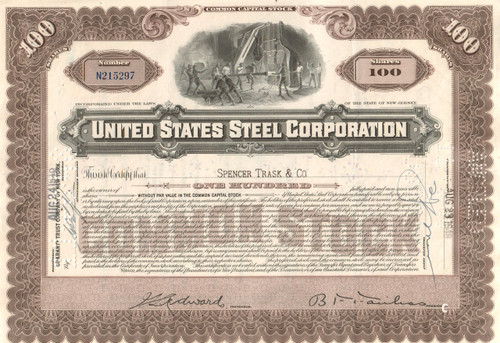 Fantastic piece of US financial history with this piece.  Fantastic vignette shows steel workers operating equipment at a mill.  Issued and cancelled.  Rare clean vignettes (others are perforated).  Dated in the 1940's.

U.S. Steel is a former Dow Jones Industrial Average component, listed from April 1, 1901 to May 3, 1991. It was removed under its USX Corporation name with Navistar International and Primerica. An original member of the S&P 500 since 1957, U.S. Steel was removed from that index on July 2, 2014, due to declining market capitalization

J. P. Morgan and the attorney Elbert H. Gary founded U.S. Steel in 1901 by combining Andrew Carnegie's Carnegie Steel Company with Gary's Federal Steel Company and William Henry "Judge" Moore's National Steel Company for $492 million. At one time, U.S. Steel was the largest steel producer and largest corporation in the world. It was capitalized at $1.4 billion making it the world's first billion-dollar corporation.

The company headquarters was established in 1901 in the Empire Building, purchased from the estate of Orlando B. Potter for $5 million. In 1907 it bought its largest competitor, the Tennessee Coal, Iron and Railroad Company, which was headquartered in Birmingham, Alabama. This led to Tennessee Coal's being replaced in the Dow Jones Industrial Average by the General Electric Company. The federal government attempted to use federal antitrust laws to break up U.S. Steel in 1911, but that effort ultimately failed. In its first full year of operation, U.S. Steel made 67 percent of all the steel produced in the United States. One hundred years later, its shipments accounted for only about 8 percent of domestic consumption.

The Corporation, as it was known on Wall Street, always distinguished itself to investors by virtue of its size, rather than for its efficiency or creativeness during its heyday. In 1901, it controlled two-thirds of steel production. Because of heavy debts taken on at the company's formation — Carnegie insisted on being paid in gold bonds for his stake — and fears of antitrust litigation, U.S. Steel moved cautiously. Competitors often innovated faster, especially Bethlehem Steel, run by U.S. Steel's former first president, Charles M. Schwab. U.S. Steel's share of the expanding market slipped to 50 percent by 1911. James A. Farrell was named president in 1911 and served until 1932.

U.S. Steel ranked 16th among United States corporations in the value of World War II production contracts.[12] Production peaked at more than 35 million tons in 1953. Its employment was greatest in 1943 when it had more than 340,000 employees; by 2000, however, it employed 52,500 people. The federal government has also intervened on other occasions to try to control U.S. Steel. President Harry S. Truman attempted to take over its steel mills in 1952 to resolve a crisis with its union, the United Steelworkers of America. The Supreme Court blocked the takeover by ruling that the president did not have the constitutional authority to seize the mills. President John F. Kennedy was more successful in 1962 when he pressured the steel industry into reversing price increases that Kennedy considered dangerously inflationary.

The federal government prevented U.S. Steel from acquiring National Steel in 1984 and political pressure from the United States Congress as well as the United Steelworkers (USW) forced the company to abandon plans to import British Steel slabs. U.S. Steel finally acquired National Steel's assets in 2003 after National Steel went bankrupt. As part of its diversification plan U.S. Steel acquired Marathon Oil on January 7, 1982, as well as Texas Oil and Gas several years later. Recognizing its new scope, it reorganized its holdings as USX Corporation in 1986, with U.S. Steel (renamed USS, Inc.) as a major subsidiary.

About 22,000 USX employees stopped work on August 1, 1986, after the United Steelworkers of America and the company could not agree on new employee contract terms. This was characterized by the company as a strike and by the union as a lockout. This resulted in most USX facilities becoming idle until February 1, 1987, seriously degrading the steel division's market share. A compromise was brokered and accepted by the union membership on January 31, 1987. On February 4, 1987, three days after the agreement had been reached to end the work stoppage, USX announced that four USX plants would remain closed permanently, eliminating about 3,500 union jobs.

Corporate raider Carl Icahn launched a hostile takeover of the steel giant in late 1986 in the midst of the work stoppage. He conducted separate negotiations with the union and with management, and proceeded to have proxy battles with shareholders and management until abandoning all efforts to buy the company out on January 8, 1987, a few weeks before union employees returned to work.

At the end of the 20th century, the corporation found itself deriving much of its revenue and net income from its energy operations, so led by CEO Thomas Usher, U.S. Steel spun off Marathon and other non-steel assets (except railroad company Transtar) in October, 2001, and expanded internationally for the first time by purchasing operations in Slovakia and Serbia.